Last month, WhyHunger headed out to the Rockaways, an area of New York City’s borough of Queens that was hit hard by Hurricane Sandy, to chat with Robyn Hillman-Harrigan, one of the founders of Shore Soup Project and Rockaway Rescue Alliance. Originally started as a response to Sandy, this unique project has now become a thriving and sustainable community food security enterprise. We sat down with Robyn for a Q&A about the organization, the Rockaways community and what it takes to build sustainably.

How was the Shore Soup Project/Rockaway Rescue Alliance started?

Robyn: “The Shore Soup Project/Rockaway Rescue Alliance started right after Hurricane Sandy.  Prior to Sandy, I had a business in the summer called Shore Fruit, where I sold cut fruit out of a tricycle cart. The idea was that it would be a sustainable business where we would make enough for that day’s sales, and we would compost any waste. It was really fun enterprise that was geared towards kids.  What we found, though, was that a lot of neighborhood kids didn’t have any money or only had a dollar, so sometimes at the end of the day, if we had anything left over, we would give it to the kids on the ride back. We wished it could be free but wasn’t sure how that could be sustainable.” 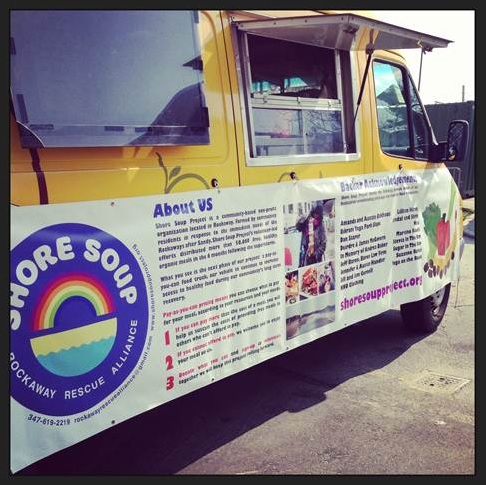 Then, last October, Hurricane Sandy hit. Robyn was at home in the Rockaways when the storm surge hit. She saw the entire boardwalk lift up and slide down the block, with lampposts and benches still attached. The 14-foot waves broke through the seawall and made their way down the Rockaway blocks.

“You felt like you were on the ocean. My house was shaking back and forth.  Neighbors had their houses flooded. Everyone lost power and/or phone reception.  People were really isolated and didn’t know what was going on.  When we came out of the house the next morning, you just saw the devastation. Cars turned over with gas seeping out of them; the house next to mine had a car smashed into it. People’s first reaction was to go outside, survey the damage and check on their neighbors. People asked how they were, told their stories and there were lots of hugs. It was an intense experience for everyone.”

After seeing the state of their neighbors, Robyn and Lillian, her Shore Fruit Project partner, decided to return home and cook up some food to give out.

“This was our first reaction, because we saw that people were cold, wet and freaked out. There were just a lot of people wandering the street looking for support. We loaded up the tricycle cart that day with hot tea, coffee and hot chocolate and served it out of jars, cups and whatever we had. The response to the hot drinks was one of gratitude; everything we had went right away.”  People started asking if they had any food as well.  So they made some spaghetti and again that went right away.

Every day after that, after enduring very cold nights in their home, Robyn and Lillian gave out hot food to their neighbors. By the third day, they decided to set up on a street corner so they could serve more people. They made their makeshift kitchen in a parking lot, with a piece of driftwood propped on two boxes for their camping stove, propane and pots and pans. Once word got out that they were there, people offered help, which often meant driving in cooked food from other parts of the city. As Robyn and Lillian continued operations for the rest of the week, their spot quickly became a one-stop distribution site for clothes, diapers, batteries, flashlights and candles.  People came to eat and then spread the word so more people could eat too. While Lillian was cooking every day, Robyn took a step back to figure out what their next step should be.

On the sixth day, Robyn met with other community members and decided that they needed to continue the work on a larger–and more sustainable–scale.  They decided to form an organization, immediately set up an email account, an internet phone number, and a Facebook page–and the Rockaway Rescue Alliance and Shore Soup Project were launched. The Rockaway Rescue Alliance is a network of groups and individuals that lead and host community programs including legal clinics, health information workshops, free farmers markets, CSAs and a community gardening project. The Alliance has been a space for community members to identify collective priorities and create a plan on how to achieve them. The Shore Soup Project distributes free healthy meals throughout the Rockaway community.

A major strength that has allowed the Rockaway Rescue Alliance to flourish in such a short time is its founders’ ability to tap into individual and collective networks, knowledge and skills to access resources. The Alliance quickly acquired a fiscal sponsor, Fund for New York City, which allowed it to accept more donations. Strong social media networks helped to spread the word and solicit more funds and volunteers.  When Robyn’s apartment was turned into a community kitchen shortly after the storm, restaurants donated prep tables, a contact at a restaurant distribution center donated cutting boards, insulated bags and knives, another Alliance member got a generator donated, and friend got a barrel of gas and a truckload of vegetables donated from upstate New York farms. 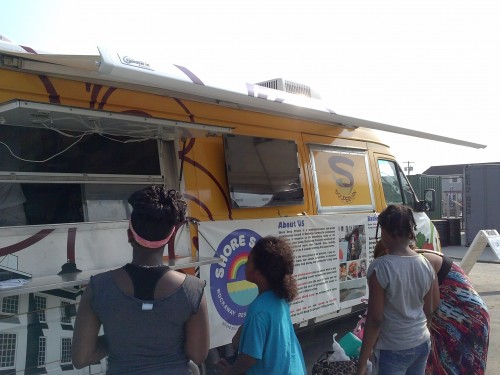 How did you move from being a relief project to a sustainable community food security project?

“Sustainability was our major objective–from the very first day we were delivering food on the tricycle cart right after the storm.  So as we kept delivering soup for months, although the need persisted, the model shifted–we went from knocking on doors to delivering soups to hubs like community centers and churches where people could pick up meals. As the immediate relief period passed, people were less comfortable receiving a free meal at their door. As we delivered instead to community hubs, people who still needed a meal could go get one. It became less about relief and more about recovery and choice.

“In those first few months, most of the calls we received were from people calling to thank us and tell us what a difference the Shore Soup Project made in their lives. Going into people’s homes and being invited in was a learning process for many of the daily delivery volunteers. Delivery is harder than working in the kitchen, because it’s outreach work. You’re going into someone’s home, seeing how they live, talking to them.  If they invite you in, you are sitting down and spending time with them.  After a while, relationships begin to form–which was what we always wanted. Folks would then ask for help filling out a prescription or helping to figure a FEMA form, so we did that too.

“It became clear that the problems were systemic. Many of the people we bring food to were struggling before Hurricane Sandy. They needed a structural change; they needed a system to support them. Once the power came back, some people no longer needed support with food, and some did. It wasn’t that it was a total surprise, but we had the lesson drummed in again and again, and we realized we needed to figure out how to be more sustainable. We needed to be a system for this community– a voluntary system that people can sign up for but that they can rely on… something that’s community-based and not people telling you what you need. It’s so much more collaborative.

“Because our project is so volunteer-based, there’s an easy way for people to engage. We met a lot people through delivery who then came and volunteered with us. When we were on the street corner, people who came to get food jumped behind the table and stayed to help out. We’ve increased our scale, but always with the community. And that’s what we want to be able to keep doing.  It’s not about dictating; it’s not a traditional charity model. I think charity is uncomfortable for people. It’s uncomfortable for the people receiving it and it’s uncomfortable for the people offering it, unless they are doing it in a way that isn’t very conscious. I think that’s essential to be aware of. When this started, we were not in a much better situation than the people who we were bringing food. What we did have were certain skills and networks, so we used those, but we didn’t really have a lot more money or physical resources. We used our other skills to get the money and the resources.”

Robyn talked about what that looked like, including relationships with urban farms, farmers markets and a large Brooklyn coop. A collaboration with GrowNYC, the organization that oversees most of New York City’s farmers markets, has also been important, and has evolved from produce donations to GrowNYC purchasing food from farmers for Shore Soup Project, as well as establishment of a youth-led and -run farmers market in Rockaway. 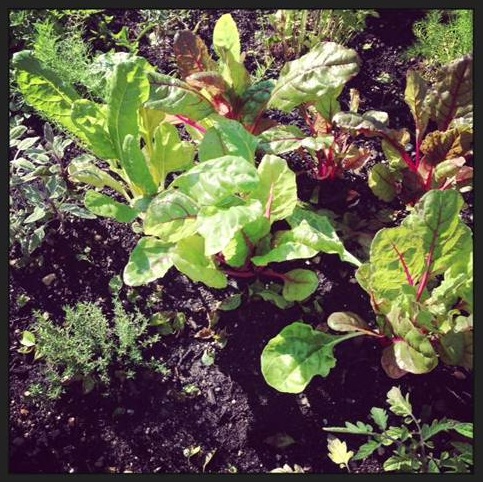 “Sustainability means two things: sustainable sources of food and a sustainable project providing food has to be sustainable. So I think to be really transparent and really present in the community and be really clear about where your money comes from because it has to come from somewhere, let’s try and get it together. Let’s all figure out a way to make this happen.”

How is the Shore Soup project funded?

“We had a lot of individual donations for the first two months, people did fundraisers for us; it was very community-based fundraising. We got several local grants, and a fiscal sponsor. We did a Kickstarter campaign, which raised $30,000 for our pay-what-you can food truck. The food truck brings in a little bit of revenue to pay for itself.  We spend a lot of time grant writing and looking for grants, but we need more funding. We just keep our costs really low. We don’t have the money to pay for administrative costs; we put it into our programs.

“It can be hard because we are doing something really out of the box and people don’t want to fund that; they want to fund food pantries and soup kitchens. But I think what we are doing is really great–and people support it with their dollars or their time or their words of support and encouragement. We are in the same situation as anyone else; we don’t know how long we’ll last, but we hope that we can do it for a long time. We don’t let fear guide us. We stay true to our mission and our beliefs.”

We’ll bring you more from Shore Soup Project on Friday! The Project is holding a benefit on Wednesday, October 23, at The Bowery Hotel in New York City, featuring food from local chefs, local beer and wine, and a silent auction. Tickets here.