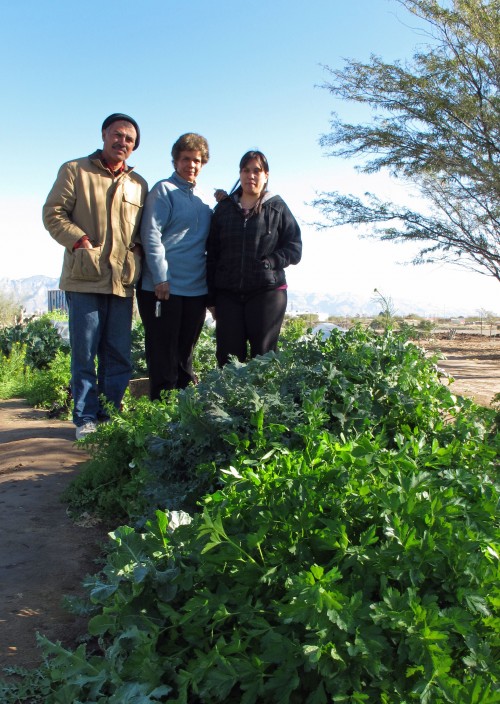 Six months ago while working with the network Somos la Semilla in southern Arizona, I had the opportunity to visit an urban farm in the south central part of Tucson which I reported on in the CONNECT Blog.   While back again last week we dropped in on the same urban farm which is a part of the Community Food Resource Center’s Farming Program (a program of the Community Food Bank of Southern Arizona) directed by Jaime de Zubeldia and managed by Chris Lowen.  This urban farm — situated alongside the dry riverbed of the Santa Cruz river — had been inching along last September with a few plots, dreams for growth, and a desire for more community involvement was now seemingly bursting with new life and activity on multiple levels.

The farm was recently renamed Las Milpitas (Little Fields) by the neighboring community which, as a result of outreach and organizing efforts, were now farming 40 individual family plots.  Additionally, several ramadas for shade had been constructed; a small green house now sits on the corner of the farm; 9 community members were beginning to form an advisory group holding meetings twice monthly; the young people participating in the Community Food Resource Center’s youth farm project were holding educational workshops for the community including one on composting; and some of the produce from the farm was being sold at one of the local farmers markets. 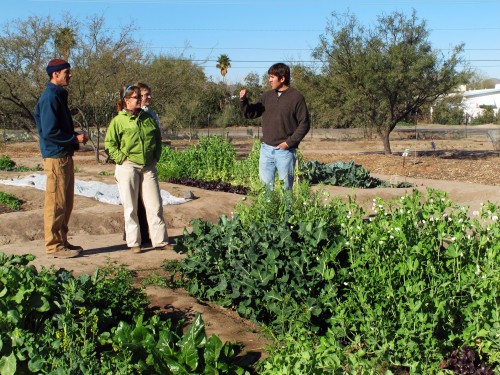 At the inauguration celebration of Las Milpitas last month which included press and remarks from the Community Food Bank of Southern Arizona’s CEO Bill Carnegie, one of the gardeners spoke to the assembled crowd and proudly reported that because of the vegetables she was able to grow on her plot at this urban farm, she was no longer dependent on the food box she regularly picked up at the Food Bank.