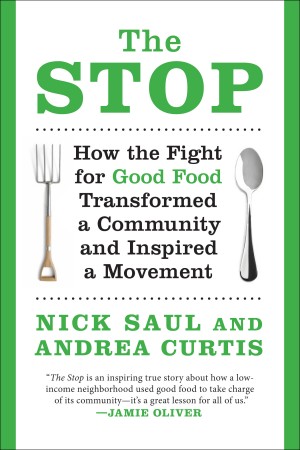 Last month, WhyHunger staff attended a book talk with Nick Saul, president and CEO of Community Food Centres Canada and co-author of The Stop: How the Fight for Good Food Transformed a Community and Inspired a Movement. Saul was the executive director of The Stop Community Food Centre in Toronto from 1998 to 2012. He described the long, demoralizing food pantry lines when he first began at The Stop: “You had to keep your eyes down…you literally checked your humanity at the door when you walked in.” His book tells the story of fourteen years of “relentless incrementalism,” during which a series of small changes transformed a pantry handing out unhealthy processed foods and produce on the edge of spoilage to a Community Food Centre with gardens, kitchens, healthy drop-in meals, a greenhouse, farmers markets, nutrition education and cooking classes.

Does it reduce hunger? Does it increase health? Does it lead to a path out of poverty? In most cases, the answer is a resounding ‘NO!’

Does it lead to stigma? Does it deepen divides between those who give charity and those who receive it? Is it a moral release valve, enabling us to feel good while absolving responsibility? More often than not, the answer is ‘YES.’

Emergency food providers become part of the solution when they use food to help the people they serve to understand poverty, organize and fight to create change. Saul says that “change comes from mobilizing community, not having a ‘government relations'” staffer. Food is powerful; programs like gardens and cooking classes and changes like providing healthy food and eliminating lines can turn transactional exchanges into opportunities to build relationships and strengthen communities. It is this kind of work that lays the foundation for The Stop’s Community Action Program, which “empowers community members experiencing poverty and marginalization to challenge chronic income and food insecurity by facilitating stronger community support networks, raising political consciousness and taking direct action.”

Saul’s book tells the powerful stories of members of The Stop who found their own power and whose lives were changed when they became anti-poverty advocates. It offers ideas for transformations – some large, some small – that emergency food providers can make to ensure that everyone has a dignified, healthy place at the table.